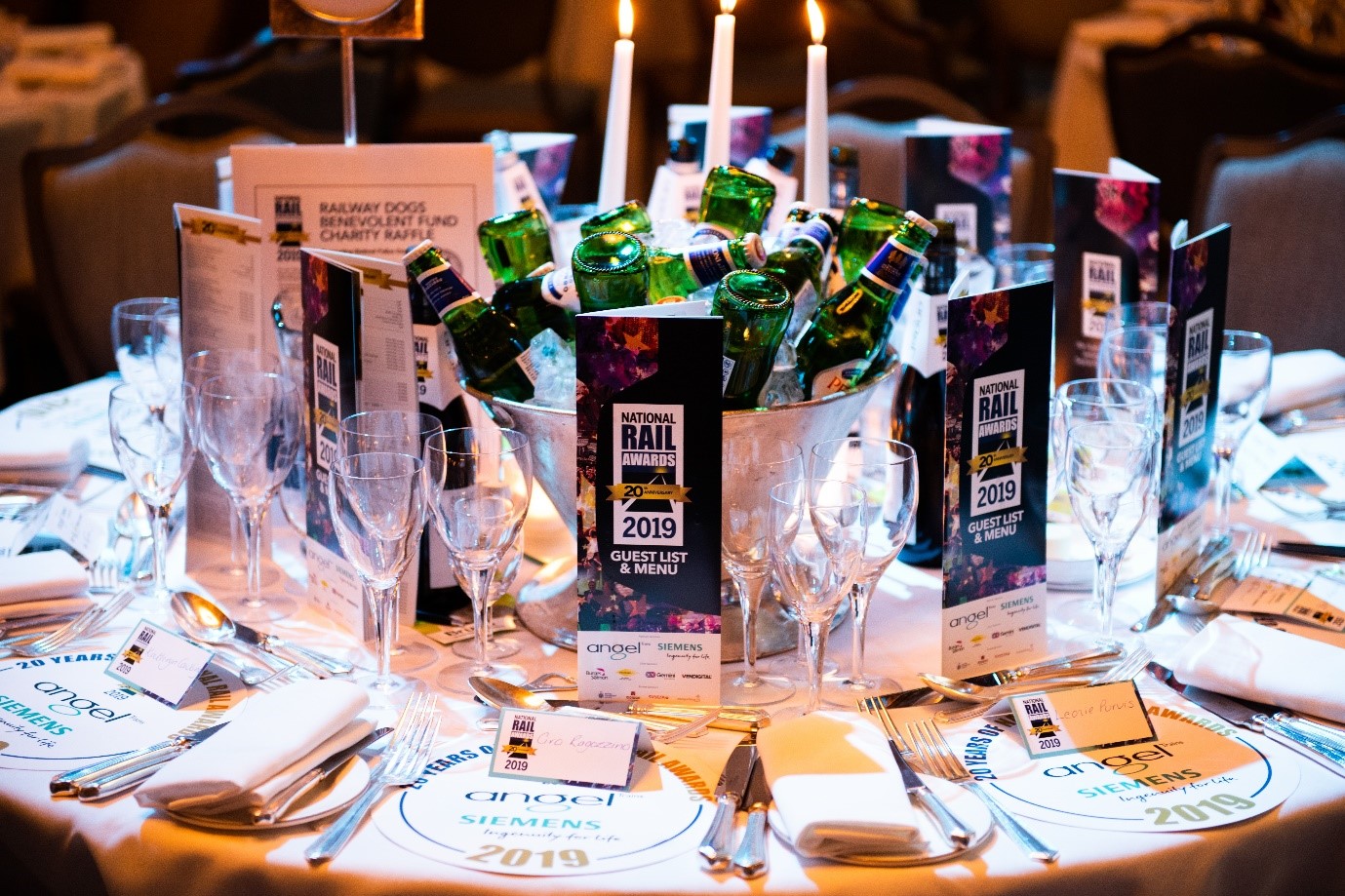 Now in its 20th year, the National Rail Awards exists to recognise excellence in Britain’s rail industry, a sector in which real achievements can be overlooked by the wider media.  BBC newsreader Huw Edwards handed out the awards on September 19, which celebrated outstanding contributions and a host of innovations and successes across Britain’s railway.

WJ Project Services Limited are extremely proud that Ashley Jordan was shortlisted for the National Rail Awards 2019 in the Outstanding Personal Contribution category.  This award recognises men and women who have performed above and beyond the call of duty, to significant effect.

The judges were highly impressed with the application that Network Rail submitted on Ashley’s behalf and he was placed on the shortlist.  All shortlisted nominations were asked to meet with the judges for a short 25-minute interview, which Ashley attended on 11th June at British Transport Police, London.

We celebrated this achievement, along with our guests, at the ceremony in London and although Ashley, an extremely deserving candidate, did not win his category, we recognise the achievement of making it onto the shortlist which demonstrates the commitment of not only Ashley but the entire WJ Project Services Team.

A significant success for The Great Western Electrification Programme has been the integration and collaboration across the supply chain and train operators engaged in the complex testing and commissioning programme. At the centre of this significant achievement has been the leadership, indefatigable dedication and professionalism of Ashley Jordan, Lead Test Engineer from WJ Project Services Limited.

At the outset of the programme, Ashley was engaged through WJ Project Services by GWEP to develop the testing strategy to be implemented across the many aspects of the project. The value which Ashley brought to the project soon became apparent. His experience, his ability to engage with the diverse stakeholders and his tenacity to drive assurance and engineering excellence across all elements of the programme have been seen, acknowledged by all.

WJ Project Services' remit was to develop and deliver the testing and commissioning programme, however with the challenges of production, constrained windows of access and multiple back to back commissioning this was never straight forward and soon grew into a more integral role within the programme. Ashley personally led on various fronts such as;

• Engagement with Electrical Control Operators, ensuring clear communications. The comprehensive test plans produced by Ashley and his team, and the methodical and his calm disciplined approach during test events have allowed testing to proceed without disruption to the day to day running of the Operational Railway

• Ensuring provision of the range of data and analysis which must be provided to authorising bodies to gain approval for entry into service.

• The planning and execution in tests on the operational railway including the running of new trains on unproven OLE infrastructure amassing more than 5000 miles of test running and providing data for electro-magnetic interference (EMC) and dynamic pantograph/contact interface performance.

• Resolving the logistical challenges of numerous contractors carrying out commissioning of 25kV substations, lineside motorised OLE switches and the preparations for major sections of the route being taken into operational service.

• Engaging with railway operators and laying out contingency plans to minimise the disruptive potential of testing not going as planned. On each occasion when testing has been so affected Ashley has risen to the challenge. Testing has always been completed as per the programme.

Ashley has demonstrated a commitment to the Electrification Programme and to the highest standards of personal and technical excellence. The last year has seen the commissioning and entry into service of newly electrified railway on a scale not seen since the ECML project in the early 1990s. The novelty of much of the new electrification infrastructure, the complex relationships between collaborating organisations, and the demands of 21st century approval processes all place great strains on the Test Engineer. Ashley Jordan has proven more than a match for that challenge, and has gained widespread and deep respect from all who work with him.

One of the most challenging aspects of electrification is robust commissioning, and this always requires a balance of detailed attention to process with maintenance of programme milestones.

Ashley Jordan has proven himself over the past five years to be the national leading expert in this commissioning field, and his contribution to Great Western Electrification is highlighted by the almost invisible commissioning stages. The enormous work behind the scenes goes unnoticed, but when compared with schemes historically, Ashley’s huge contribution becomes clear.

He has led a team which is technically superb, responds to short term requests readily, and has consistently gone further than required, particularly in meeting the needs of EMC testing associated with introduction of new trains on the GWML.

On top of all of this, the GWML system includes the technically advanced RATS IEC 61850 digital system, which has to be commissioned as part of the overall process. Ashley has risen to the challenge of working with this new each technology, and as a result now leads the field on this.

Ashley Jordan has a rare ability to be both technically brilliant in his specialist field of commissioning complex OLE projects but also a great leader in what is often a very high-pressure environment - I have absolutely relied on him on this project for both. On many occasions Ashley has had his plan changed and re-changed and on every occasion he managed the situation safely, professionally and ultimately got the job done. On a project full of people who have given lots and performed at the highest standard, Ashley still stands out from the crowd.